In The Gambia's Lower River Region, south of the Kiang West National Park and between the Bintong Bolong and the River Gambia, lie three villages: Kuli Kunda, Jamaru, and Brikamanding.

Kuli Kunda has a school that goes up to grade 6, to whom the children of Jamaru can walk the 2 km each day.  But of the 53 school-aged children in Brikamanding, only 8 are in school.  The distance of 4 km (2-1/2 miles each way) is just too far for a child of 5 or 6 to walk to and from school, ...and so most never did.
GambiaRising's Coordinator in Lower River Region (Alieu Gaye) was also a teacher at the Kuli Kunda School. He visited Brikamaning several times with a Peace Corps volunteer and they agreed there was no solution except to build a small school in Brikamanding. Might GambiaRising donors fund the materials so the villagers could build themselves a school?  "Talk with the community," we said.  So Alieu called a meeting. The alkalo (village chief) was enthusiastic.  So was the community.  They would happily do the work to build a school, and they would send their children if such a school was available.

Enough funds were raised to get started. But the same remoteness that led to needing a school also made getting materials there complicated. The first batch of cement was loaded onto the roofs of three different "bush taxis" en route from Soma to Sandandi, then on to Kuli Kunda, and finally to Brikamanding:
The villagers went to work making bricks for the first classroom:
The Ministry of Basic and Secondary Education insisted that two classrooms be built. Alieu found a supplier of cement in Sankandi, and even a truck to deliver it as far as Kuli Kunda. He personally pitched in to load and unload the truck:
But that truck could not make the final leg to Brikamanding. So a caravan of donkey carts took over. One tire went flat, so boys helped to push. It was dark when they arrived but the men were still working.
It was planting time so the men and women were working in the fields all day. But progress was made:
In early August, the walls were getting high, and more materials were needed. Since the rains had made it good for planting, Alieu filled a taxi with metal rods, wood, and added some TREES, and brought them from Jarra Soma to Brikamanding.  The children all turned out for the tree planting.
On September 6, 2020 a team from the Ministry of Basic and Secondary Education (MOBSE) visited the school. The progress was reviewed, and the community turned out to meet with them.  A checklist was created that the community (and GambiaRising) would commit to.  The team from MOBSE would be taking their report to Banjul for planning meetings for teacher assignments for the next school year.
The roofing materials were not easy to transport.  Then came the doors and the window covers.
Being careful about COVID-19, the government insisted on disinfecting the classrooms:
The desks were built near the coast.  Getting them to the school was complicated, but they found a way: 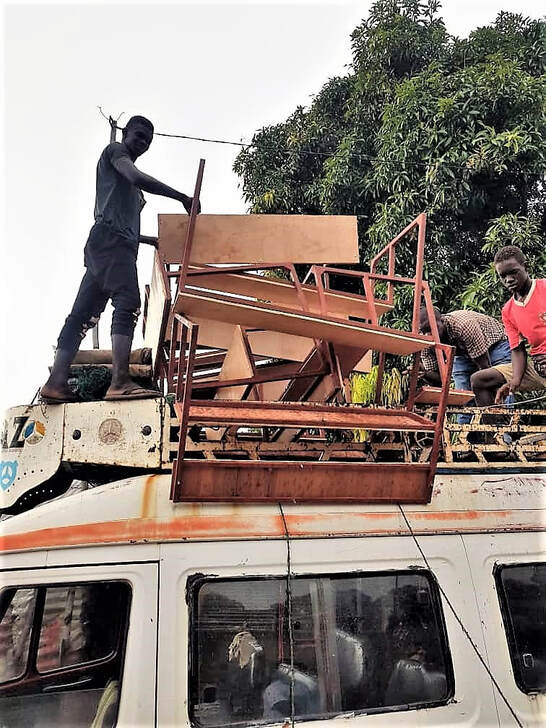 The opening of schools was delayed to late October due to COVID-19.  And the team got everything done. 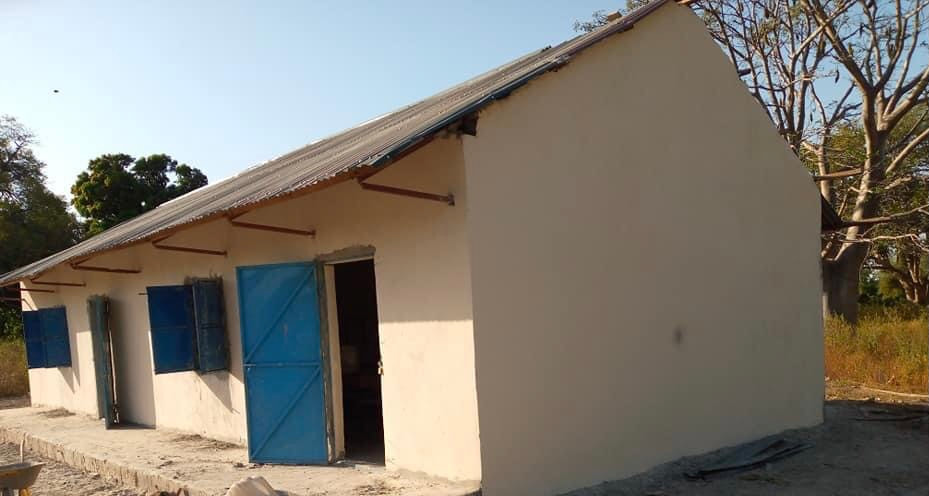 Teachers were sent. One of them was Alieu, who was named Head Teacher.  43 students enrolled, from ages 3 to 14.  There were two grades: Early Childhood Development (ECD) and 1st grade.  After classes began, work continued on the toilets, and painting the school: 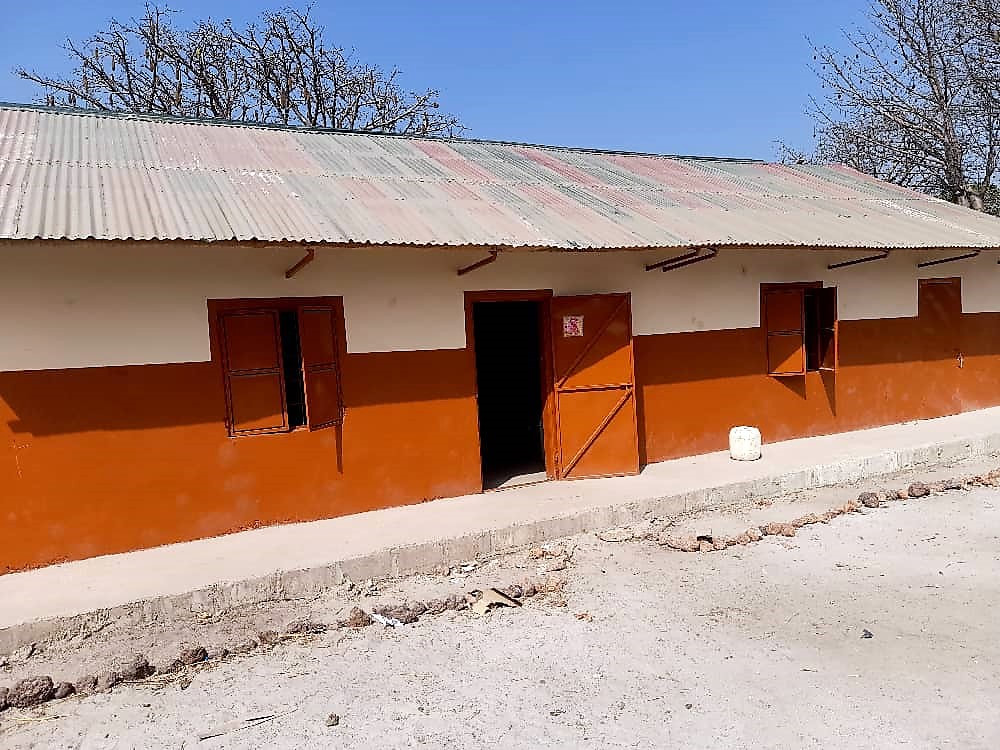 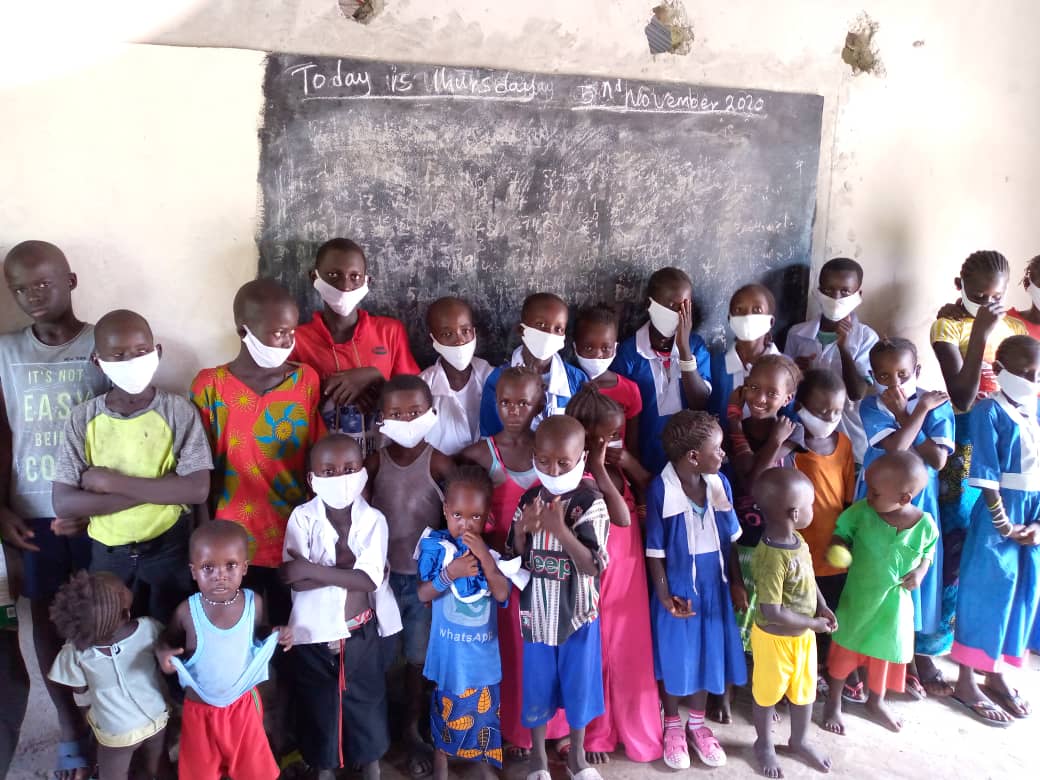 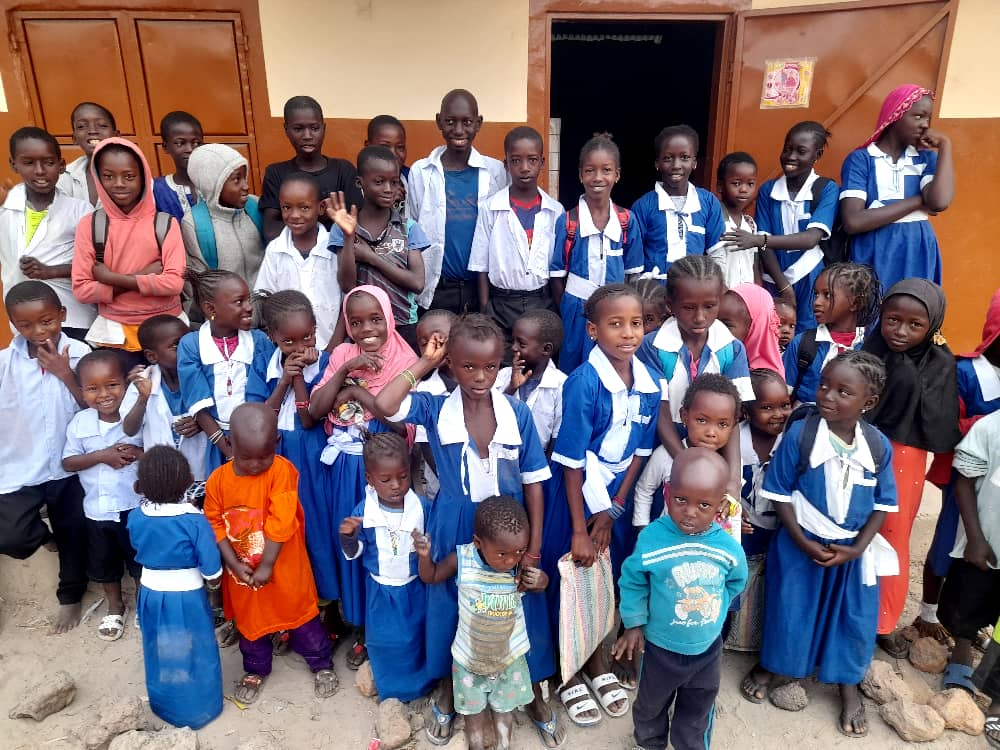 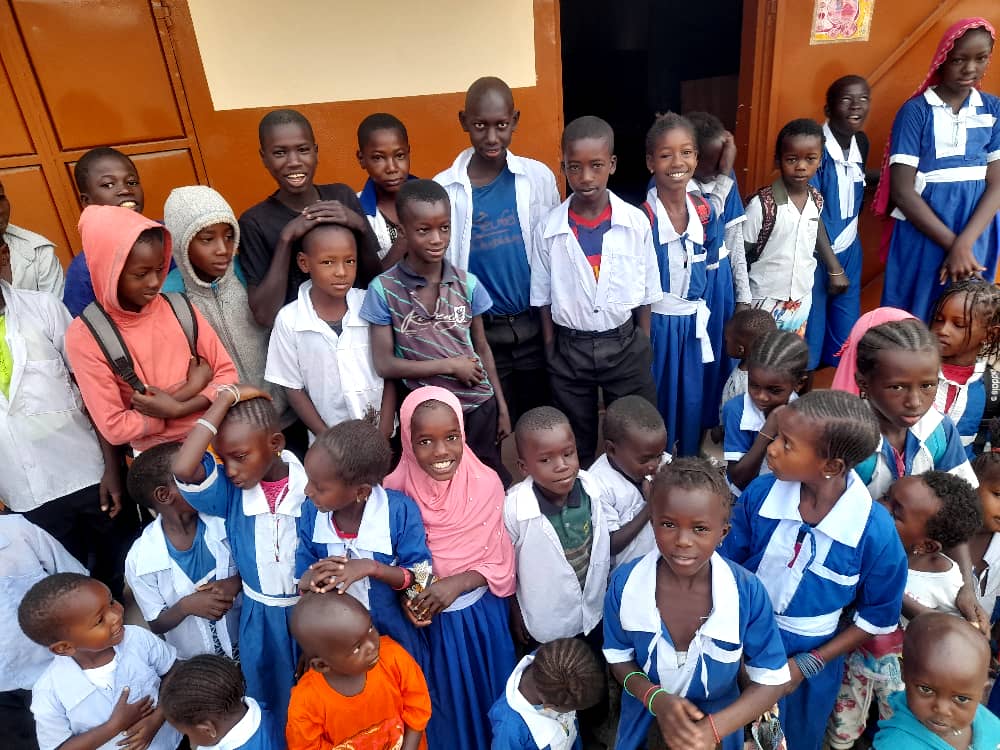 Two of the first teachers assigned to the school turned around and left: this was beyond remote.  Alieu pleaded for a second campaign.  The teachers needed a place to live.  And so Phase Two began.  Bricks were brought from Kuli Kunda to build the housing.  The women of the village also built a kitchen for the children to have a hot meal each day.  (Villagers contributed the ingredients, and the mothers took turns cooking.)  Fencing was added for a small school garden.  An office was build for the head teacher.  And in the second year, with three grades, there were 60 children enrolled.
​By the fall of 2022, the school had 4 grades in two classrooms, in double shifts.  Flora and Sebastian, the American teenagers who had led the fundraising campaign for the school, visited in December 2022. 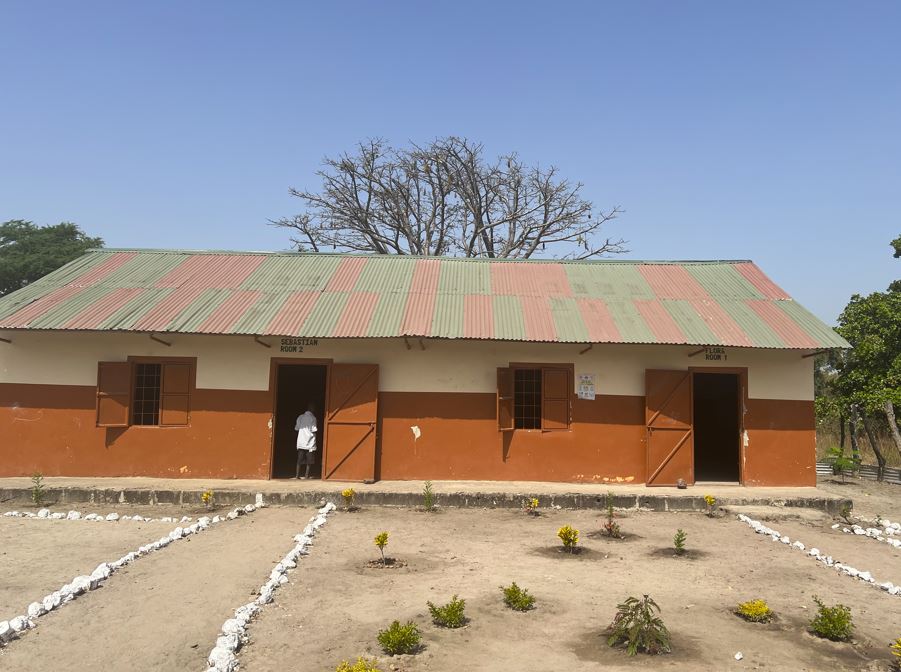 In early January, the community met at the school to discuss its future. 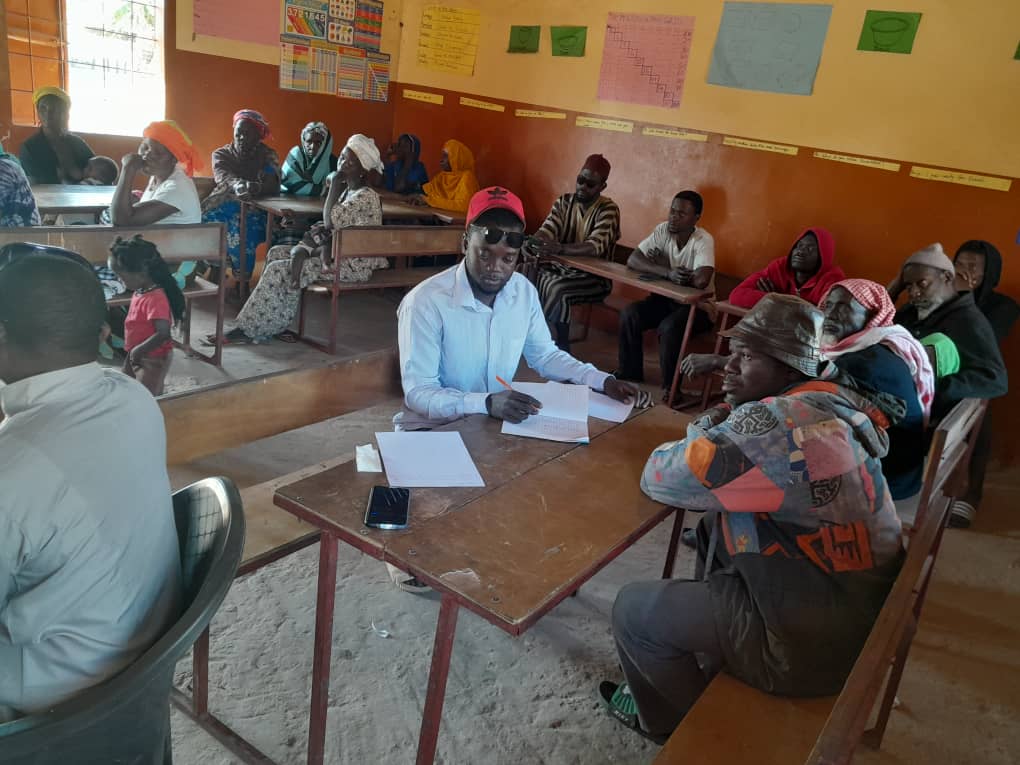 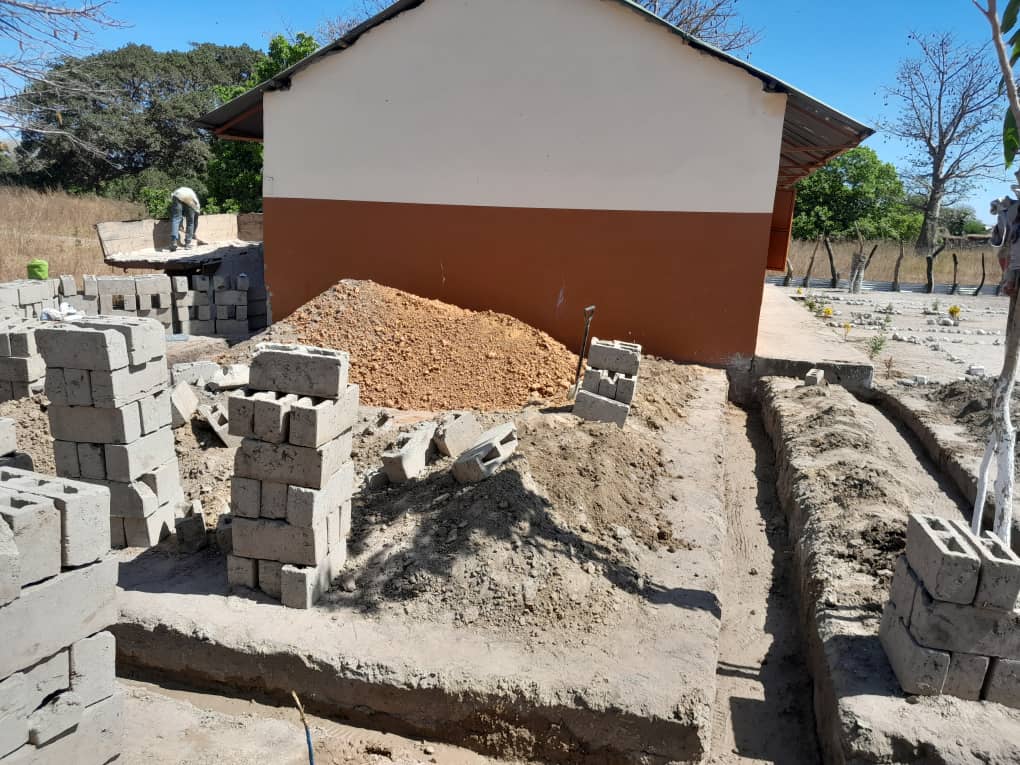